As I told you, I met this guy (Danny), who is cycling around the world. And I decided to make a few (about 400km) from Samsun to Trabzon with him.
Because I'm lazy, far behind with the reports and we did the entries for his blog together anyways, I decided (with his kind permission) to just copy them.
Sometimes I will add something in italic.
You can find his Blog here.
Enjoy the proper english :P 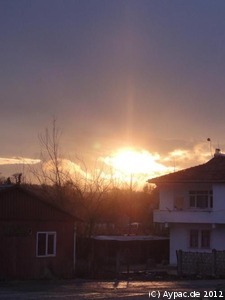 There was drama in the morning. I had agreed to take on Ren? as my cycling companion until Trabzon. He was a German guy who was dossing around in Turkey until he was supposed to meet a friend in Istanbul (And what I -that I can tell you already - successfully did). He had a few days to kill and really wanted to do a little bike tour of the Black Sea coastline. I knew that it meant I would have to cut my distances on what promised to be very flat, fast roads, but I had time, and a friend was very welcome.

We had agreed to meet at 9am, which we did, but on arrival Rene told me he didn?t have a bike. I thought it would help if he did, because cycling tours don?t tend to go that smoothly without them. The problem was that he had one lined up, but a money transfer onto his credit card hadn?t happened yet and so he had no money. I decided to lend him the money. He seemed like a stand-up guy and I thought it would be a shame for him no to be able to go. Excitedly, he hurried off to buy the bike, and came back an hour later. The bike wasn?t spectacular as, but it worked, and for 4 or 5 days it would be fine. We set off.

The first 40km was great. It was so nice to have someone I could speak to, without struggling to convey meaning all the time. It was all very relaxed and the conversation jovial. We stopped once in that time for a couple of glasses of tea and to change Rene?s trousers (which he then abandoned/forgot and had given back by the disgruntled waiter).

The conditions were absolutely perfect except for the surface water. The wind was still, and the roads were flat and smoother than a baby?s bottom. It got even better for me, because to my delight, Ren? had failed to invest in mudguards (I actually had not that big choice, basicly two diferent bikes), and with every puddle it looked like someone had taken another swipe at his face with a toilet bush.

We plodded along. I felt good, finding a nice rhythm in an easy gear to just turn my legs over nicely. Ren? was still doing well, but the novelty and adrenalin was beginning to wear off for him, and he was starting to feel it in his legs a touch (I started to regret that I spent so much time on my chair, after school, before heading off to my trip).

Then the police chase probably didn?t help much. We were flagged down by the police whilst we were attempting to eat and piss at the side of the road. They were mighty curious and asked us all kinds of questions. The moment seemed right, so I asked them for a photo. Happily they obliged. It was going well. They invited us for lunch and told us to follow them. This was where it got exciting. You know when you are a kid and you do a runner on the police on mischief night? Well, now they got even. They sped off, but just about slow enough to make us think we could follow them. Pretty close to sprinting, we held on. The longer it went on, the harder we had to push. Ren? dropped off. I carried on, hoping it would be the next junction, but they just went on. Eventually they disappeared over the horizon and we never saw them again. One day I will find them and chain them to a treadmill that never stops. Until then? Slow clap for the clever police men.

We didn?t have too far to go, and took a couple more breaks for food, and one to admire the stunning sunset. As we headed downhill into Unye, Rene sustained his first flat of the trip. We walked the bikes into the centre to find a hotel in which the relative of one of my friends worked. My friend had told us that he could get us into his family?s Unye summerhouse, and his relative could take us there. We were mighty happy about the whole thing since it gave us a chance to get warm and showered and all for next to nothing.

The relative took us up the road to what looked like another hotel. He was all smiles as he showed us in. A little suspicious we went into the room. This didn?t look like a summer-house, and it certainly didn?t look free. As it happened, it was not, and we were now in a position where we might have to pay a sickening amount of money for a hotel room we hadn?t even wanted. After dinner (where we also got ripped off ? pretty sure 1.5 size portions are not a thing) we went back and prepared ourselves for what promised to be a horribly awkward miming game were the mime would be ?this is too much, so we are gonna get off, even though we have showered and used your internet for a bit?. The asking price was 140TL (about 28? each) and though they said they would go to 110TL we swore blind we wouldn?t go a penny over 100TL (even though that was also fairly upsetting). We enlisted the help of my friend over the phone to explain the situation, after deciding the miming idea could be messy. After explanation and some hard-core bartering they agreed to let us stay for 100TL. I very nearly turned on the waterworks to seal the deal.

Having sold my soul for 10TL, we relaxed, farting and lapping up the free internet to our hearts content. A friendship was born.