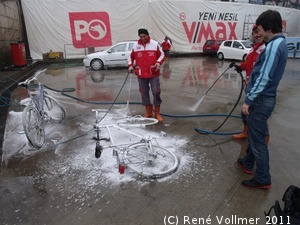 After spending half a day in the city of Trabzon (which frankly appeared quite boring to me) and washing the bikes at a petrol station for 1Lira each, I had to say goodbye to my new friend Danny and took the bus back to Samsun. I intended to pack my stuff there take a fast Crepes-Dinner (with the French host) and get on the next bus to Istanbul to meet my new travel-mate Rike. But it was the official beginning of the university-holidays (which I - of course - didn't knew), so all buses were booked out. But another surfer who was sleeping at their place proposed to hitchhike together to Istanbul next morning. So and sold my bike to the French girl and we all went out for a few beer again. 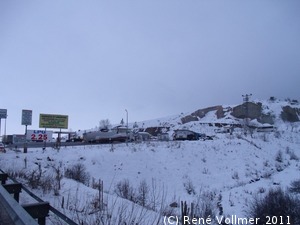 The next morning (after three hours of sleep!) I got up in time and started packing my things. When I woke up that couchsurfergirl, she told me that she changed her mind - she would stay longer in Samsun. So I hit the road myself.
After 18 great (again: Truckdrivers are AWESOME! Some even invited me for good food!) but incredible exhausting (and two encounters where guys who took me tried to bargain some money) hours of hitchhiking in the cold without jacket (yes it can get pretty cold in the mountains of turkey) I reached the railway station where we wanted to meet - It already was 3AM.
So I stood there waiting for Rike to come.
The person I've never seen before. I've never talked before, just written a few messages.
And the person I would spend the next 7 month with.
What if it doesn't work? I would have lost a lot of time for the countries I really wanted to go to, like Nepal, Tibet and Lao. 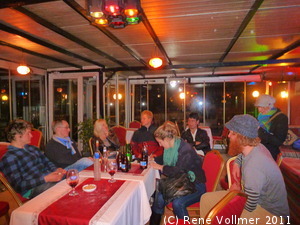 After a few minutes she arrived. We started talking. I can't remember what we were talking about. But somehow the time we reached the hostel we already were asked if we were a couple.
We had our first beer together and any worries were gone (or course that meant for me another night with just 3 hours of sleep). 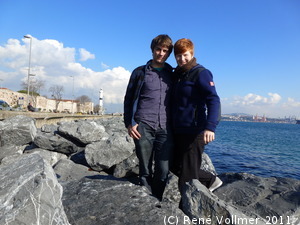 After one sightseeing and get-used-to-each-other-day we decided to hitchhike to Ankara. So next morning we got up early and visited the blue mosque on sunrise (which was highly recommended to me on my first visit). Or at least we wanted to, just to find out that the door of the hostel was locked (what would happen if a fire breaks out?!). Nearly giving up we found someone to let us out though and we made it in time to the mosque. 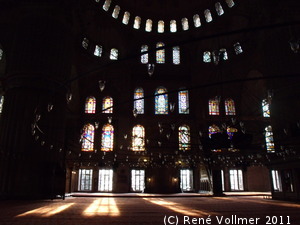 The guide didn't lie; the light was awesome! See yourself in these pictures (click on the one on the left and click the ">"-Button to see all pictures).
Then we took the ferry to the asian side. While climbing a fence to the motorway (yes you can just hitchhike ON the motorway in turkey) Rike broke the display of her camera, so since then we blindly take pictures with that one. It's a little bit like shooting into a bush and then walk by and see what you drag out. 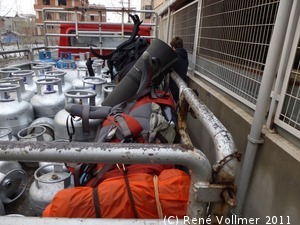 But somehow it turned out, that we were standing at a smaller motorway which is parallel to the big one. Cars on that one where mostly going like 2-5Km only so we had big troubles coming through and it was already 5PM when we arrived in Izmit (you remember?), which is like 1/5 of the way to Ankara. We though about putting up the tent (in the heavy snow falling), but I proposed to at least try it for one hour - after that we still could put up a tent. 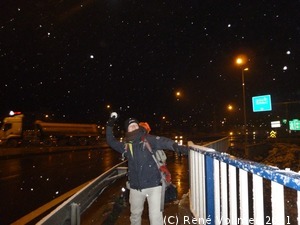 Rike agreed and suddenly started a snowball fight. Which lasted and lasted. Still standing on the motorway, putting out the thumb every few minutes when a truck would come by and throwing snowballs/building snowman - a truck stopped. We explained (in our highly professional turkish as you can image) that we want to go to Ankara - and strike (did I mention that truck drivers are AWESOME?!)!
Though he only spoke Turkish, we talked most of the time (with the help of our ~40Words vocabulary and the help of hands and feet as well as a dictionary in my mobile). And he invited us for dinner. Late in the night (and after we already caught some sleep while driving) we reached Ankara and the destination where he had to put down his load - when we suddenly realized that it was a beer factory! And the truck was loaded with - guess what! So we even got some free beer that night! 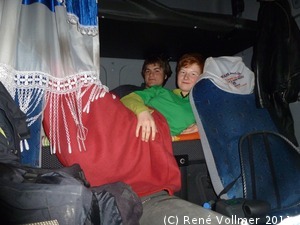 After that we slept in the truck (which was actually to cold for me, because I was siting on the drivers seat and it was -15?C or colder that night) and at the same time it was my forth night with way to little sleep in a row.
In the morning again some free breakfast and then heading to the center and was dropping us in the city. 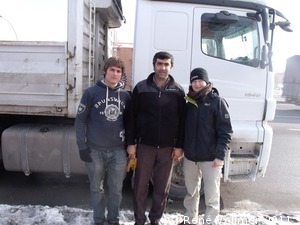 After saying goodbye (and Tesekkuller (Thank you!)) we were searching for the train-station (there was supposed to be a luggage claim and a tourist information - both really usefull because our host wasn't able to meet us before 6PM) and figuring out how the bus-/metrosystem works in Ankara.
We finally did it and explored Ankara (without luggage *YAY*). Because I needed a new Iran-Visa (the one I took in germany expired while waiting for Rike) and we both needed an India-Visa, we where checking out the embassies first (mostly to check the opening hours and knowing were they are, because both were closed).
Arriving at the Indian Embassy we did something stupid: The door was open (though it was not during the opening hours any more) and there was a great view on the city so we walked on the plot to take some pictures, when suddenly a woman was coming from the building shouting at us. She also was asking for our names (but we said no and vastly (but not running) walked away). So we decided that is was a better idea to take the India-Visa somewhere else (Iran or Pakistan) and getting me just the Iran-Visa. 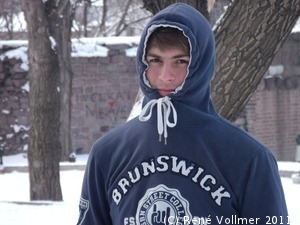 After drinking some coffee and trying to warm up we picked up our luggage and took the bus to our hosts (who lived quite far outside the city). Arriving there we got of at the wrong bus-stop and he had to pick us up with the car. We were totally frozen at that point - me even without a jacket and we both had a cold night plus day, hungry.
His name is , he is a older (38?) guy, but very friendly and nice. 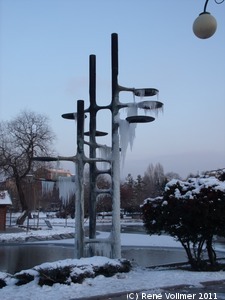 After having pre-prepared dinner, we both took immediately a hot (!) shower and - after I set up his computer with a nice Ubuntu - went to bed.
Here another story:
As I told you my a** god dammed hurt after the bike-tour. I figured that as normal after four days riding a saddle which was frankly spoken sh*t. But it got worse and worse since the night sleeping while sitting in the truck and some fast (but not too precise due to the lack of privacy) observations it seemed to be swelled a lot.
So I checked it out in the toilet of the host (I could barely sit or stand/walk at that point because of pain) and found a approx 4cm-diameter-pimple on my a**, which leaked a felt litre of pus mixed with blood (and yes it was at least as disgusting as it sounds).
Awesome, right?
So I decided to push out as much pus as possible and make a giant plaster with some cr?me on it. And the next morning it was really a bit better (though still scaringly big). 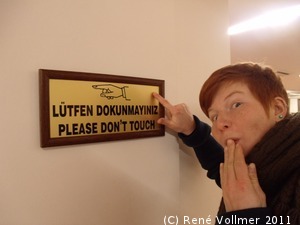 But we had a full schedule for that day; Getting photos for my Visa, giving Rike's camera into repair (what finally failed) and visiting some museums as well as exploring the city.
Well in the evening we went again to the host to have some dinner and pack our things again (but with reduced weight, leaving a lot of stuff at his place) and send some CS-last-minute-requests to Cappadocia.
Next morning I finally applied for the Visa and we headed of to Cappadocia.
Typical Turkish situation: We were searching for the next bus going (it was 14:50), anyone send us to one counter which only had tickets for 16:30, no matter who you ask tell you that there is 100% no other bus. A quick look a electronic display showing the next buses going, and it displayed a bus at 15:00. So we looked out for the company and found it. And yes, they had some tickets left.
100% sure, right?

Thanks again to all the awesome truck drivers and CouchHosts out there!!!