The highest Train Ride in the World! 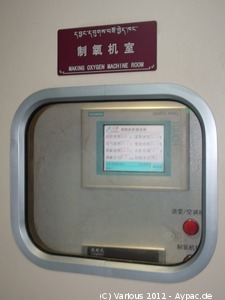 The highest train ride of the world was about to come.
"The Qinghai?Tibet railway, Qinghai?Xizang railway or Qingzang railway [...], is a high-elevation railway that connects Xining, Qinghai Province, to Lhasa, Tibet Autonomous Region, in People's Republic of China.

The total length of Qingzang railway is 1956 km (1215 mi). Construction of the 815 km (506 mi) section between Xining and Golmud was completed by 1984. The 1142 km (709 mi) section between Golmud and Lhasa was inaugurated on 1 July 2006 by party general secretary, president Hu Jintao: the first two passenger trains were "Qing 1" (Q1) from Golmud to Lhasa, and "Zang 2" (J2) from Lhasa.[1] This railway is the first to connect the Tibet Autonomous Region to any other province, which, due to its elevation and terrain, is the last province-level entity in mainland China to have a conventional railway. Testing of the line and equipment started on 1 May 2006.[...]

The cabins are pressurized and before you start you have to sign a paper which says, that your health condition allows to ascend to these altitudes. 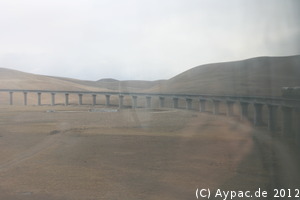 The Chinese again did impressive work here. You can see the on whole route bridges, snow-protection, power-lines et cetera. I mean it speaks for itself: The cabins are pressurized!
The whole ride was 33 hours. Anyways we just took hard seats, because Chris, one (german) guy of our group, had only one booked from home and we wanted to sit all together. It turned out to be a not to good idea: The lady at the counter separated us all over the train anyways and it got quite crowded. 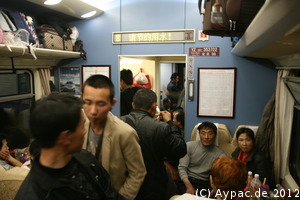 And of course sleeping in seats is not too comfortable. 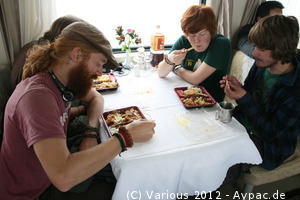 So we enjoyed a few meals together in the restaurant. We just stayed there for some while after we finished, and because no one is speaking English it always took some while until someone had the courage to signalize us, that we had to leave. 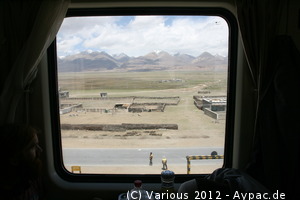 The panorama is awesome. I mean it is somehow the same as in whole Tibet, but you (at least I) can't get enough of it. But because we couldn't open windows (because of the pressure), there are no awesome pictures of it. 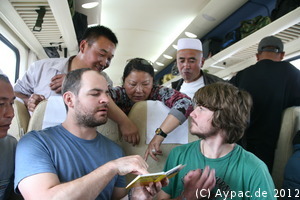 Oh, one more story about the fact that no one speaks English in China! Seriously! I've not been to any country before where so few people speak English! Most people (feels like 99%) don't even know "Hello", the numbers or how to ask where you are from.
But Chris had a 'No-word-dictionary' (ger. 'Keine W?rter-Buch') with him - a book with just images to point on in it, so we could have a short and weird conversation with some people in the train.

The Norwegians (on the bord-restaurant-picture on the left) had to leave in Golmud.

Finally we reached Xi'an. From the train we already saw the ancient city wall, the silhouette nicely illuminated. The city seemed gigantic (as far as we could tell, just arriving there in the night).

Chris already had an address of a hostel as well as a good description how to get there.
It turned out to be a really nice place with a good bar. Of course we took a few beer together there. A Chinese came to our table and invited us to his table. He introduced us to his friend and told us, that he was the musician, that played before (and we missed) and invited us for a few drinks.
Oh, and we learned the custom, that as soon as you touch a Chinese's glass you have to empty it. That kinda made our evening, I think I never felt so drunk from so few beer.

Tired and happy we fell in our beds.