Because someone told me - and that's undeniably true - that it would be better to write something recent and catch up later with all those missing reports - I decided to do that. So after my last reports in Turkey - Cycling with Danny and meeting Rike - we traveled through Iran and Pakistan and arrived in Varanasi, India. 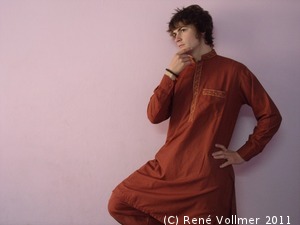 Though we were told it would be the most disturbing experience in our life (dead people being dragged through the streets, dead babies being bound on stones and dropped into the Ganges and of course people being burned in the Ghats at the Ganges), we didn't see something too unusual - but of course we didn't explicitly search for it. But we also were quite busy for the first two days organizing (buying) us some bikes and textile and other materials to make us some panniers. 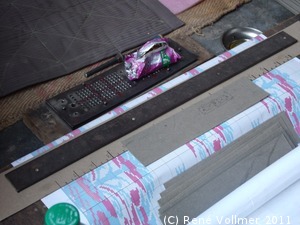 Oh and I have to tell this story to explain some pictures here. When we were asking the owner of our hostel for the textiles, he said he knew a place and he could drop us there. When we arrived there we first got a tour through all the production of textiles in Varanasi. It was quite impressive. They still work with machines which look like pre-WW1. First they make a design on paper with 1x1mm squares (they color each box). Next they take good old punch cards and code the design in them each row of the design one card. The cards are put in long chains (the more complex the design the longer the chains, the more colors the bigger the punch cards) into the loom. A worker is handling the loom. Per meter of fabric they need a few days, we were told.
All very interesting, but of course it turned out to be completely from textiles we are talking about here. We needed something like the army uses - and we finally really found a good one. One the "hunt" we met a German woman, we met before in the train, a few days earlier (think about the probability: Varanasi is a really big city!). She was with a guide, who invited us to stay for free at his place. We changed numbers. 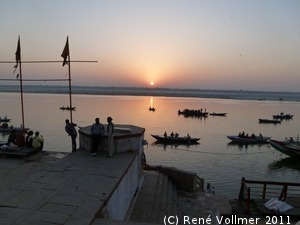 The next day we finally took a small tour through Varanasi, including a boat drive on river Ganges. But the trip to the temples later (with our new bikes struggling of heat and the CRAZY traffic in India) was ended by a sudden breakdown of Rike's circulation. Because Rike was quite worried, we tried to find her a doctor. But everybody told us, that they're closed during the noon and would open 3 hours later. So we asked the way to the nearest hospital. When we told them Rike was not feeling good and we would like to see a doctor, they acted completely stunned. After some time they got it ready to write down an address of a doctor. But no chance to make clear, that we would like to see a doctor NOW and HERE. Also a description of the way was impossible to get. So we took a Riksha. But obviously the driver had no clue were to drive to, so it took us a few attempts (and a lot of time of course) to get to the intended address. Finding the place where the doctor had actually his office took another 15 minutes. Just to find out, that he had the same noon-brake. Great. Because Rike was feeling better and I seriously doubted that anyone would only understand her problem, I convinced her to slowly and carefully drive back to the hostel. 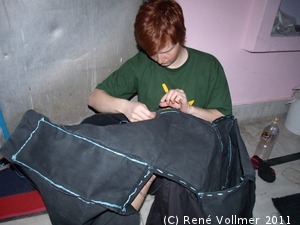 So Rike spent the rest of the day in the hostel and I was strolling around to get some smaller items for the journey. Also we decided to stay the last night in Varanasi at this travelguide's. So we finished one pannier and packed our things in the night for the next day to move to the guide's house. 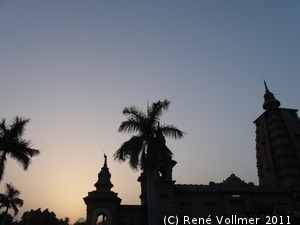 Anil (the guide) was a great guy and helped us sending some stuff (we didn't want to carry any longer but still keep them, like our Pakistani dresses) back home. The next day we originally wanted to head of for Sonauli Border but I cought a fewer, stomage problems and a massive cold (huh, isn't it really warm in those countries? How did you manage to get a cold?! Actually it is really easy to catch a cold in hot countries. In a lot of shops, cars, flats etc they massively use A/C's and sealing fans. When you come really sweaty from outside you will start to feel really cold. And this is what makes you sick.). So we couldn't start. Everybody cared for me and so I felt way better the next day already (and Rike finished the second pannier). But still I was quite weak and though it would be a better idea to stay one more day. So we made a nice daytrip to [Sarnat], where Buddha had his first speech. The location is not too great but nice and peaceful. 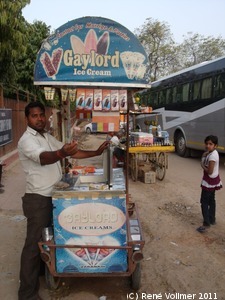 The next day we finally hit the road.