HOLI the festival of colors 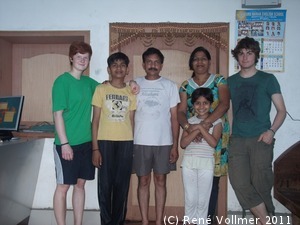 After we got out of the city (Varanasi) the roads were nice and the traffic okay. So we easily made our first 60 or so km to [Anil's family house]. His family did not speak english. But somehow Anil was around and arrive one hour later by car.
Here we could really see the confirmation of the story of Anil's life. He told us, his father was came from a very poor family. His "business" was to walk around the villages and "buying" scrap (metal, glass etc) with salt and selling it again. 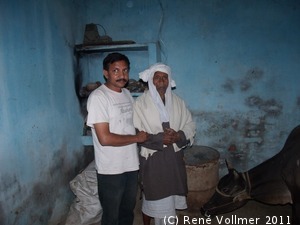 His family could life from this money, but just like this. You could see this especially edged into the skin of his mother, a very small and unbelievably thin woman.
So Annil moved to Varanasi and a friend lent him 1000INR (Indian Rupees, ~15?). With this money he married his wife, payed the rent for their first house and started the tourist business (No clue how he managed that!!!).
Now he owns 6 different coaches and moved into a bigger flat. But still he knows where he comes from, uses only little money and doesn't like to show it. Also he still works hard, gets up at 4 or 5 AM.
I was pretty impressed by this person. 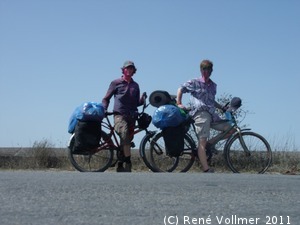 Whatsoever, the next day we made another 60km. We decided to make relatively small distances. The reason were, that the road was and our bikes are quite bad and we have a lot of luggage. Also we start quite late (normally about 11AM) because our things have to dry in the morning (morning dew), in the hottest period of the day you can't drive (without collapsing), because it's simply too hot and in the evening we need some rest light to find a good spot to camp.

So after these 60 or so km, we found a spot which seemed quite nice. We put up our tent and started cooking. But if you have to find one word for India it is crowded (and the second one would be dirty!), so we were spotted and surrounded quite quickly. After being stared at for a whole while and answering a few questions, we went to bed. We only took the inner tent to protect us against mosquitoes, but still be able to see the stars.

In the morning, it was before sunrise and I think 4 or 5 am, I suddenly woke up by some voices. As I woke up I saw a few people standing around our tent and starring at us. I figured that rude but normal. So I fell asleep again. But every time I woke up after that more people came, spoke and laughed louder and came closer.
It ended up, that our tent was surrounded by people in a few cm distance, starring from above at us sleeping and trying to ask us questions, as soon as one of us would show, that he was not in deep sleep.
Any attempt to explain to them, that this might be rude and that we would need some privacy to dress and us pack our stuff was hopeless. Nobody spoke English properly or was even interested. So we basicly dressed in front of them. Then we tried to pack our stuff, but the people were standing close making it impossible to even move. And anytime we could make clear we need more space and they really moved back a little - they would come closer and closer after a few seconds again.
Rike still answering their questions, I was quite pissed off and wouldn't talk to them anymore, except it was not preventable. 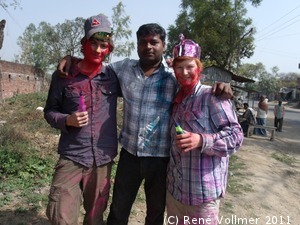 When we finally managed to pack our stuff we headed off - and got a full bucket of color in the face - it was Holi - the festival of colors and equality. Over the day cycling everybody (except for the guys in the morning) turned out to be extraordinarily friendly, offering us free colors, food or drinks. And of course everybody either sprayed color at us or tried to stop us and mark our face with new powder-color. A quite nice and happy festival. 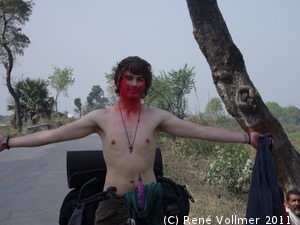 When we found a nice location to camp (we tried to choose a place which was a little bit better protected against unwanted in-views and I think we somewhat succeeded, but we had to wait for the cover of darkness, because we had to cross a field. As soon as we would cross the field and someone saw us - we would have a replay of the last night). So we hung out some time, waiting for the darkness to come. I felt really shitty at that time, suffering under stomach-problems and a fewer. Also a lot of small symptoms of a weak immune system showed up - like my old friend the monster-pimple showed up at the quite same spot as last time. 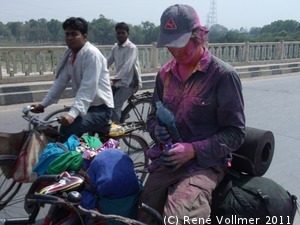 So I was quite happy when a guy from the other street side invited us to come to his office. Because I just felt terrible and though we could use every little help (and the guy spoke quite good English) I explained him the situation. He said it would be a bad and dangerous idea (wild animals and drunk people) and offered us to sleep in our tent right in front of his office - no one would bother us there. We did this. This was totally exhausting for me so I fell on my sleeping pad and fell asleep. Rike head off to search a possibility to get the colors and sweat off her body. The next time I woke up the sun already set, Rike still away. No energy to search her. Mosquitoes started to like me way to much. I decided to move the three meters into our tent - absolutely exhausting again. I fell asleep - still completely dressed. 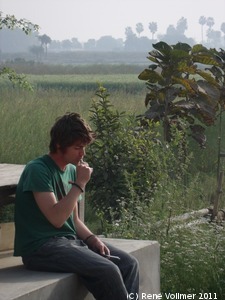 Rike showed up and said the neighbors - where she washed - invited us to move our tent to their patio. Again really exhausting 20m. But at least I could clean myself a little (of course outside just with a bucket of cold water and some soap), what gave me a fresh, clean feeling what gave me the energy to talk a little bit to our new hosts. After getting an awesome pain toast with a little bit of salt (just the right thing for my stomach) we went to bed. 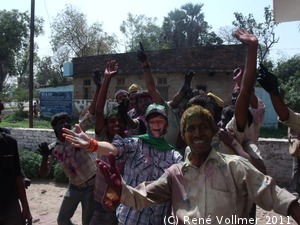 The next day I felt way better - still far from perfect - and we went on on our way. The second day of Holi took part. I couldn't really enjoy it though. First I still felt quite bad (for example the pimple forced me to cycle the hole day standing) and secondly the first guy stopping us (a crowd of 20+ guys blocking the streets, forcing us to stop) managed it to put a full hand of powder-color into my mouth. I was vomiting rainbows for the next half an hour. Rike had quite big fun with those guys (who where honestly really nice, relaxed and friendly). 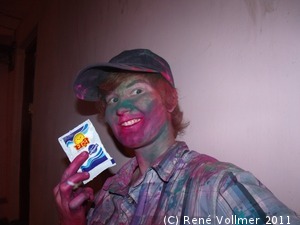 But also our backs, our clothes (which we didn't wash last night) - and of course we ourselves were as colorful as a rainbow. So we decided to stop in a city (Gorakhpur) this night and stay in a Hotel with a proper shower (which means a cold bucket of water inside). We only ate fruits in the evening (usually we eat everything offered on the streets, but in India the word was "dirty" and so everything was - including the food) in the hope to improve condition of our stomaches (Rike had some minor problems, too). 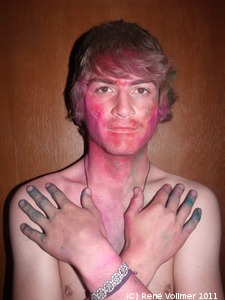 The next day was quite "normal", except that we couldn't really find a good spot in the evening to camp. Rike proposed to take a quite nice spot, but it was 10m away from the road. She said we should just leave very early (4AM or so) in the morning to avoid starers. I really didn't like the idea and though it was getting darker and darker we went on. But of course in the pitch dark (we din't have lights on our bikes - of course not - and could therefor barely see the road) we couldn't find any other good spot. I started to regret my decision and Rike got really pissed. We both were hungry and tired. So I said we should stop to cook some dinner (tomatoes chopped, cooked and salted). We did this near a water pump (to clean the things afterwards). Of course it was in a village, but it was so late, the streets were near to empty. After some time a guy came over and assisted us with some light from his mobile.
When we just finished our dinner someone else came by with one packet of these YumYum-5-minutes-noodles. We didn't really understood what he wanted, but somehow he wanted that we cook them. So we did. When we finished we offered him the noodles (firstly because I though at that time it was primarily to see the camping cooker in action, we weren't hungry anymore and it sounded somewhat as he wanted to eat them) but it was hopeless - of course we had to eat them.
Though nobody spoke English they "asked" us where we want to sleep. I drew a little tent with a stick in the dust of the ground. They understood. They offered us to put it up in something like a garage (which turned out to be the sleeping place of something like a night guard from some rich people nearby).
Very thankful we accepted that offer. Of course everyone around us was up very early - and so we did - and we could head off before sunrise (what is a very good idea in India, because in the noon-sun it's REALLY hot and you easily get sunburns). 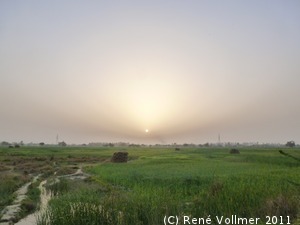 So we made it to the Sonauli Border that day. This border is more like a Schengen-Border. People are constantly passing through and nobody is checking them. And even we passed the border several times before getting our visa. We found out beforehand, that you can get Nepal-Visa on-arrival for 100U$ each. Also it is possible to pay in INR (Indian Rupees) or ?uro. Arriving there we found out they would charge extra for that, so we went to a change-office. The official change rate was round about 75? equals 100US$. We ended up paying 170? for 200U$. Just to find out that two 3-4mm long cracks in the bills made them invalid for the officers. They expected brand-new bills. So I went back and after some hard debating I could finally get us 4 brand-new dollar bills, which were finally being accepted.
We made our way to Lumbini - the birthplace of Buddha and took a hostel recommended in the lonely planet, which turned out to be quite nice, except that the WIFI-Signal was too weak to surf in the rooms.