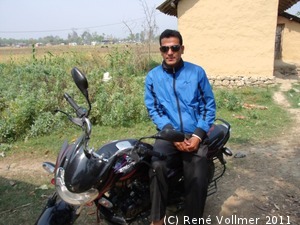 Dilip was a quite young English teacher. He came with a friend on their motorcycles and escorted us to his brothers shop. There we sat for a while and chatted about this and that (extended introduction). After some time we finally followed him to his place, a small traditional house (build mostly out of sticks, straw and mud) in the middle of some fields. But that was quite what we expected, his CouchSurfing-Profile was really good (later we learned that some guy he met in Kathmandu and he invited to his place wrote most of his profile). And soon we had our first dinner here. It was the traditional Dal-Bhat (Dal is a lentil dish and Bhat is rice, plenty of it :). Later he was asking us to come to his school next day to talk to his students and make them more interested in English and to tell them methods how they could improve it. So we went to bed early to get up at 5AM. But the next morning Rike wasn't feeling too well (guess - again the stomach) and I went alone with Dilip.
Without breakfast we went on his motorcycle to school. The first course consisted only of four students (I learned later that this was something like a "best-of-course"). After a short introduction of myself Dilip ordered (that was really a little strange. He always tried to dictate as much as possible, also he PRECISELY gave me orders what part (e.g. introduction) should come when) them to ask me questions. It was not as good as I expected. Their english was not really good (what surprised me, because the average english in Nepal is pretty high) and two of them were also shy, so there was a lot of uncomfortable silence and the overall experience was not as good as expected. But at least the lessons there seem to be short. I think it was only something around 20mins. After a short look in the staff room and a few very short chat with some teachers we went to the second class. This time a really big one (I guess more than 30 students), but this time medium level only. Again, introduction of myself, I was getting used to it and it was already a little longer than the first one. But Dilip was thinking of new methods to dictate, so everybody had to stand up one after the other and introduce himself (in - of course - a given form: Name, Class (which was the same for all of them), Village, questions) - as I could remember one of all these names or even ever heard about one of these villages. But anyways there were some interesting questions, and especially one topic fascinated all students: The idea of love marriage and more than one relationship in life or born out of wedlock children. We came to this point through my family (for those of you who don't know it: My parents never married, got my older sister and me together and separated. After plenty years both married another person and got children again). Here it still is perfectly normal to marry early, often in arranged marriages. But to have a relation ship before marring - unthinkable!

Next class in another school. Introduction starts to get fluent. Again, nearly the same questions/topics (climate in Germany, concept of relationships, feelings about Nepal).
On the way home I bought some coke and dry bread for Rike. She was still not too well and had no "breakfast". 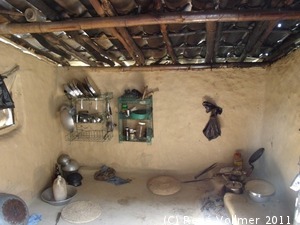 This "breakfast" turned out to be Dal-Bhat!
After kindly rejecting the invitation to visit more classes. But that didn't mean no more schools that day! 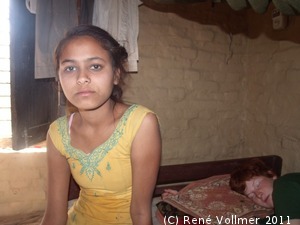 Suna, Dilips niece a (maybe) 15year old girl, asked me to come to her school. Just to the entrance, because she was writing an exam that day. I didn't really want to and always said only "maybe". But she wanted it so hardly that I decided to be nice that day :P
It turned out to be quite a bit to the school (I guess at least 20mins straight walk through the fields, plus picking up friends). And as soon as we reached the school I had of course to be introduced to all teachers. So I sat still with the teachers when the lesson already started (I don't know why so many of them weren't in class).
In the evening we (excluding Rike, who was still struggeling) had Dal-Bhat again. It seemed that the two words "food" and "Dal-Bhat" are 100% exchangeable in most Nepali households. Also there seem to be only two meals a day. Late breakfast and dinner. 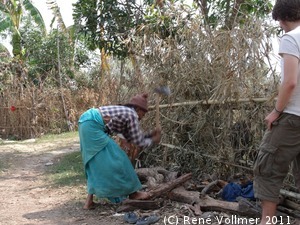 Next day Rike felt better, but we slept long. Neither of us was eager to get up early to answer the same questions all over again. So Dilip was in school alone and I thought I could be helpful in another way and wanted to help Dilip's mother with chopping the wood. She, by the way, was the person I liked most in the household. Though she didn't speak any english she got never tired in trying to communicate with us and was always friendly and smiling. Anyways, I horribly failed with the wood. I mean I know how to chop wood. I lost one of my fingertips doing it as a child. But this wood was different. Real good tropical wood - hard as stone. It just doesn't splinter, it doesn't seem to have grain at all. But at least the mother had great fun and was (in a friendly way) laughing at me all the time.
But I succeeded to repair one socket (which was simply wrong wired). But doing this I realized how horrible the whole wiring in the whole house was. Dilip showed himself very open to any improvements I could do.
For those who have a rough idea about electronics: The brother (who did the wiring) thought it was a awesome idea to cheap the electric companies (at a price of 5ct per KWh!!!) and put only one room behind the counter and fuse. The other rooms were basically DIRECTLY wired to the main line! No fuse, nothing.
Also the wiring inside the switch/socket-boxes were a mess. Also there was no ground wire of course.
I decided to change the first both facts. 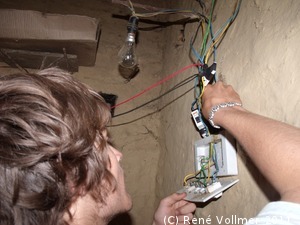 It was quite complicated to figure a way to disconnect the switch/socket-box from the mainline (as I told you - directly wired), but we called Dilips brother and during the loadshedding (in Nepal the biggest part of electricity is produced with Hydro Power plants, so during the dry season there is not enough electricity, so there is a schedule for all parts of Nepal and there is only electricity for two time four hours a day) we managed to disconnect and later reconnect this.
I think with the limited resources and possibilities I did a good job here. Maybe the house burns down a few years later and a few less people die of electric shocks like this (at least in this house).
In the noon Dilip said something that he would like to show me something (he was very clumsy and I didn't have the chance to ask), and got me like this to attend one more class (yay, same questions again!).
But Rike told me she was presented to all kinds of family members near and far. Later I got the chance to see what she ment: Suna was dragging us to family members we're still not sure about what family level they really are. 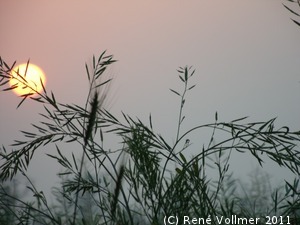 To conclude: It was really interesting to see the life of Nepali family like this, but it was really annoying to be "showed" around to all kinds of people like the newest iPhone. Oh, and after some time you just pray that the next meal will not be Dal-Bhat (it is actually quite nice, but they use two spices I learned to hate since Pakistan, and after three days of Dal-Bhat with that spices...)!


Next day we took the bus to the [Bardia National Park]. We would have liked to cycle but we had to cross the park and that is not allowed by bike.