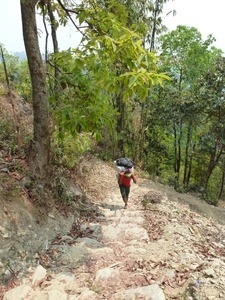 After an one hour ride (for 50ct each) we reached [Phedi] (some also write it Fedi). There we bought two bamboo walking-sticks and I had to organize some petrol for my camping cooker (it had only half fuel left). In the end I twisted myself into the hood of a car, holding a small hose, waiting for petrol to drip into my 1L-Bottle. The hose was the gas-line we removed from the motor of a taxi.
We finally started our hike to the Annapurna Sanctuary. The Annapurna I is the 10th highest mountain in the world and it's Base-Camp is on 4,130m.
We planned 10-14 days (Lonely Planet) and had complete camping gear, sufficient food and cooker with us. 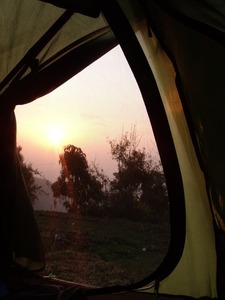 Up, up, up, up the stairs we go... until we come to... Pitam Deurali (sry no Tunnel, spiders and orcs :P). There we built up the tent and cooked some rice with a powdered soup. I tried this before on my trip to Norway (you cook the rice with too much water, then you add the soup) and it was great, but this soup was horrible (to not say disgusting) and we struggled to eat it - and left some for breakfast (we thanked ourselves in the morning :O). We only paid ~1? for the campsite.
In the morning we had a great sunrise and started early. We went a good part of the way we went up the day before down - just to walk it up later the day again. 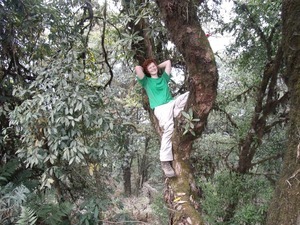 Though it was quite early, I convinced Rike that we should stay in Jhinu, instead of continuing to Chomrong as planned. Why? Because it had HOT springs! I couldn't miss that.
But at that time it was already raining heavily and we took a room. Rooms are cheap in Annapurna region, but they force you to eat in the attached restaurants (once we bargained for a room and we had to promise "No cookies in the room!") for horrendous prices (otherwise we would have to pay a few - for which you can easily have a meal). 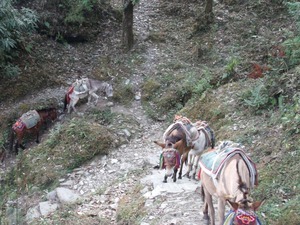 But at least the springs held their promise: They were nice and HOT :)
Maybe you don't get that in you warm flat at home in Europe, where you can take a hot shower or bath at any time. But if you haven't had a hot shower or bath in a month (indeed, since Varanasi we only had "bucket-showers", means you have a piece of soap and a bucket of cold water), you are freezing cold and wet, then a HOT spring is something worth dying for.
Also there were some nice people in restroom/restaurant and we talked, ate and played cards (a new version of "Arschloch"/"Asshole"/"Presidente"). 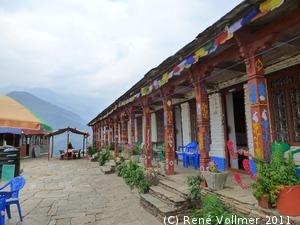 Next day we reached Bamboo, again quite early. But on the way the rain surprised us, and before we could get out our rain cloth we were soaking wet. And opening a bag in the rain was never a good idea, so we just walked on in the rain till Bamboo. There we decided to stay (of course not camping, as you can guess :P). 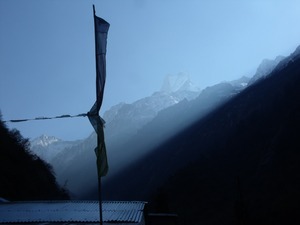 We hung our wet things, but they didn't get dry at all. We froze all the evening, but it was a nice one after all, not at least because we met an interesting woman from Moldavia. She told us about the political situation in her country: After some kind of "Facebook-revolution" against the conservative party the left wing parties could gain more than 50% of the votes, but not the necessary 2/3-majority. So there had to be new elections. Again the same 2/3-thing. That went on for two years. In that time they had of course no working government.
It always surprises me, how something that absurd can major can happen so near to us, and still I have never heard of it...

The lodge-owner turned out to be incredibly greedy. That woman was criticizing her in a quite open way, but she didn't even realize. This money-often-turns-people-into-assholes just works all over the world.
And last but definitly not least she told us she was coming from upside and there it was full and if we walked on, we would have to walk back again (or further on). So it was not only a lazy decision but also a lucky one. 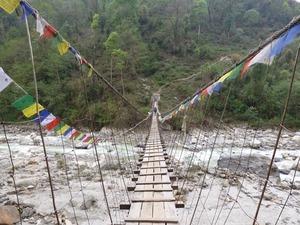 Early up again and after a trail continuously ascending we reached Dovan at **m. It was getting colder. We also started seeing a pattern in the weather: The morning nice and quite good views. The noon very, very hot, almost too hot. 2PM, clouds start moving in. 3PM slight rain. 4PM it's raining like monsoon (though it was early pre-monsoon). Also our things were still quite wet. So we wern't camping again.
But that meant again: No cooking. We decided to trade in our rice (we had 3Kg together!) for a room and 100NPR of the bill (so we saved 400NPR's, we payed 90 in Kathmandu). 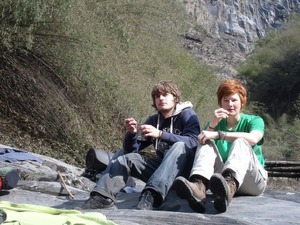 By the way: Have you ever heard about AMS (acute mountain sickness)?
If you ascend to high altitudes, the air pressure decreases ("the air gets thinner"). The higher you get the harder it is for the body to get oxygen ("breathing gets harder"). Especially if you work hard (like walking with heavy luggage uphill) this can get a problem. You need more red blood cells to absorb enough O?. Also the body has to regulate the blood pressure etc. This process is called acclimatisation and takes some time.
So recommendations say you should not ascend more than 300m above 2500m height from night to night. 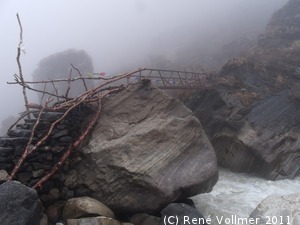 That was our plan. But because everybody told us that there were rare problems at all (at least on this trek) we already ignored it last night (Bamboo on 2335m to 3230m in Deurali).
But when we reached the MBC at 3700m we notice how hard walking got and how strong we were breathing. We stopped for a milk chia. But there were no symptoms of AMS at all and it was still noon, so we started walking in direction on ABC (remember Annapurna Base Camp on 4130m?). But suddenly Rike wasn't feeling well - guess not because of the altitude or something - just because she drank way too much chia int too short time (we had a 1.9L Thermos!). 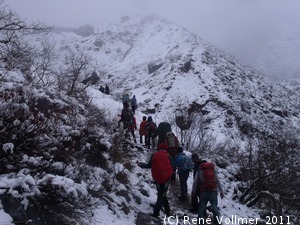 But it was a very nice lodge and we had the whole dorm for us. Also we met a German development helper. He worked in Tanzania a few years back and was now working in Nepal. His field of work was coping the energy problems in Nepal (remember the power-cuts aka "load shedding"? Or the strong deforestation everywhere.).
The thing in Nepal there is enough cheap electric power available! There is the possibility for hydro energy plants everywhere. The investment costs per KWh would be around 0.05? (in Germany we pay 0.15-0.30?). There is a technical loss of 30-40%, but the government fixed the end-consumer-price at 0.05-0.07?. So investing in new power plants is completely uneconomic, so no-one does. Projects like more efficient stove often fail because of small things like the wrong cooking height (for the Nepali way to cook) or similar things. 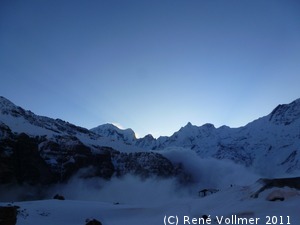 We were told that it is very nice to walk up to the ABC at 4AM, so you reach it at 6AM with the sunrise. So we started walking at 4AM. It was moderate dark, because the moon was near to full and the snow around us reflected the light. Just a few rare times we needed a torch. And it was highly scenic. First the moon shone on the snow-covered mountains. The cold moonlight slowly got replaced on by the warm twi-light of dawn. Suddenly the first sun rays touched the first mountaintop: The Annapurna I, we were just right for the sunrise-showdown at ABC.
The sunlight slowly "walked" down the mountains, the sun itself still invisible. Clouds drifted up the mountain into the gorge into the plateau surrounded by the Annapurna mountains - when suddenly it broke out behind the mountains on the other side.
Watching this spectacular view we had some breakfast: Warm milk with our own M?sli and some chocolate bars.