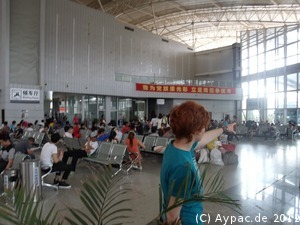 A small reminder: We were in Kunming in the last report, planing to go to Laos.

Getting of the train, we luckily met a woman speaking English (as I told you - rare in China!). And even more luckily she wanted to go to the bus station as well! We bought tickets until short before the border. Because we had something like 6 hours left until the bus would go and there was a shopping center near, we decided to look for a new camera for Rike (uh, you don't know that: On our second hike in the Everest-Region (Nepal), someone stole Rike's camera, so she traveled without since). But this gigantic shopping center (I guess bigger than any in Germany) turned out to be purely for clothing!
Returning to the bus station, we saw a bus with "Luang Prabang written on it - which is already IN Laos and quite the location we wanted to go to! I went to the counter explaining with hands and feet that I want to change the tickets (I mean everything in Chinese letters, which could be as well small monkeys playing drums for me). But the lady at the counter was good (or my explanations were) - she understood quite precisely what I wanted.

It was a sleeper-bus going from Kunming to Luang Prabang. Yes, you here me right: A sleeper bus! I've never seen one back home, but here in SEA (South East Asia) they seem to be common.
Getting Laos visa on arrival (@Boten Border) turned out to be easy, though, because we had no visa for China in our passport (they issue it on an extra piece of paper when you enter through Tibet), we had to go back and get a copy of the visa, what took a while.
Anyways after round about 24 hours of bus, we arrived in Luang Prabang.
Since we started from Kunming, it continuously got warmer and more moist. In Laos the climate is, especially now in the pre-monsun, really hoooot and moist. You sweat all day and take up to three cool showers a day. 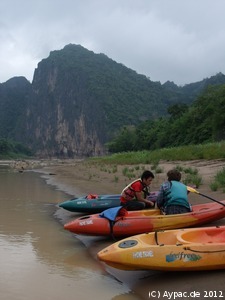 Luang Prabang is a really chilled and nice place, some people say the best place in Laos. Also the food was great.
Except for the usual sightseeing (in Laos it's mostly temples) and going to the bowling area (the only place open after 21:30) to enjoy a few beer we did a Kayak-tour to some holy caves with thousands of Buddha-statues near *Mekong* river. And finally learned the most important thing in life: How to make alcohol (Whisky) :P. It was really awesome and for round about 200.000KIP (~20?) really affordable (for a whole-day trip). 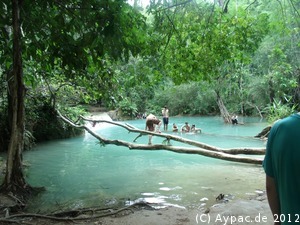 Another day we went to the waterfall nearby. There were many small pools/basins and many waterfalls in between. Awesome, I tell you. They are quite awesome, and it is not too bad, that they are quite crowded (instead I think it would be almost boring if they were abandoned). And the water was refreshingly cold. River here are piss-warm.

Taking a VIP-sleeper-bus to Vientiane for about 19?. It was so strong acclimatised, that we froze at night |:O.


Yesterday we went to the Embassies to get our visas for Vietnam, China, Mongolia and Russia (according to our plan to take the transsib(irian Express). Because the Russian visa has always been pain in the ass, we decided to get that one first - and truly, that one IS pain in the ass! The Embassy doesn't issue visas for foreigners - only for residents in Laos. Great.
Without checking the other visa, we went home. A short calculation shows, that (not only because of the visa) the transsib-tour would be approx 500-1000? more expensive than spending more time in SEA. That made me thinking.
While Rike is still convinced and willing to do it, I'm seriously thinking about staying a little longer here. See a lot more of Vietnam and Laos and then take a flight back to Germany. I think that should be at least as good - and I don't have to spend days on train and bus (just a 50 hours-flight or something). On the other hand: I would really love to go to Mongolia and Russia, hitchhiking back from Moskau to Berlin and Hamburg, showing Rike around in Hamburg - and seeing the Great Wall in Peking would be nice too! Not to speak about all the affords in making plans.

Though all that thoughts I was concerned about one more thing I couldn't cope before. Approx since four weeks I have a firstly growing peanut-sized and now date-sized hard thing under my skin, on the inside of my leg. Seriously concerned, that it might be cancer or something I wanted to go to the doctor since then, but it is not that easy around here. Whatsoever, here in Vientiane I had and have the time. So I went to a hospital. In lack of a real reception or anything I started asking around for a doctor. After less than half an hour (that's fast around here!) I really got to see a doctor.
After taking a look at it he confirmed my earlier thought: He thinks it is Cancer (Seriously? You think? As a doctor you should be sure what you're saying!). Shit.
I can't really describe the feeling and short pieces of thoughts running through your head. It's weird.
Anyways, he didn't seemed concerned or anything at all. While still thoughts running through my head, he told me totally calm and almost bored (maybe a little like: "Couldn't he have figured that himself?") I should put some creme on it.
"No operation or something?"
"No, no. It is soft and you can still move it..."
"So this is nothing serious?"
"No, no. Not Serious."
("Couldn't he have told me that earlier?")
On my way out he told me to apply the creme twice daily and if it doesn't get smaller to come again after one week.

That's it so far. Here we are today. Rike went to the Chinese embassy just after we had a great breakfast, while I went back to the Hostel, writing this and considering plans for my ongoing travels.
Comment below what you would choose if you were me (if you want to xD):

If someone wants to know:For my whole journey until today I spent round about 3100?.

go on travelling with rike!

I did decide to fly and now there is no way back. But now she is not sure anymore if she wants to fly. To many problems getting visa etc.

Actually there was a way back and I took it. Let's see how it works out :D Our passports are still in Germany, while we're in Laos.In the best case they are back on 26.06.'12, our visa is valid until 29. :OPress thumbs!