We had our last day in Vientiane, but still a lot to do. Visa here, visa there, gathering information, final sight-seeings.
And we got a new information meaning that the whole Transsib-thing would be cheaper than we expected. That made me change my previous decision again.
In the evening I went to a French doctor to double-check the diagnosis I got two days earlier. She told me quite fast that that was bullshit and this was one more of this puss-things, just deeper under the skin. She also said you can't do a thing, to prevent them. Some people just tent to get these things. Great.
A little relieved I returned to the hotel room.
Next morning, we still had stuff to do before getting on the bus to Vieng Kham:
First sending a parcel back to Germany with some presents. Then getting the Vietnam-visa I already had for Rike and lastly we had to send our passport to a Visa-service in Germany. Russian Embassies only issue visa for people living in this country, so we had no other option. One weak point about this plan - sending passport away is always dangerous.
So we went back to the hotel grabbing our stuff and heading for the bus station and Vieng Kham. It was evening by the time we reached there and though we originally wanted to go on to Ban Khoun Kham or even further to the Kong Lor Cave, we decided to stay there. We took a cheap room in a guest house and directly went to bed after dinner. When I proposed to set an alarm clock (we usually use Rike's old phone for that), we realized that that one was missing. Though it is a really old and crappy phone, Rike kinda was bound to it and wanted to go back the next day. Because bus tickets are not to cheap I decided to come with her to the next village (hoping to find a internet cafe) and wait there for her. So I got of in Paxan and we said we would meet at 8pm again, if she wasn't back till 9pm I would go back alone (we had our bags stored in a shop and it would be closed if we left in Paxan after 9).
I started searching for a internet cafe, but everyone I asked told me there was none. I went down the street, having a look if I could find one my own. A pick-up was standing on the road, speakers with loud music and people drinking beer were on it. It was the rocket festival that day. They invited me for a beer straight away (it was still 10am or something) and to come with them. "Hmmm... Why not, everybody told me there is no internet cafe anyways and I have to kill 11 hours." So I went with them. We were driving through the village, picking up more and more people. From the pickup I saw a internet cafe, but I thought I can go to the Internet any time, I don't have anything urgent to do anyways. While driving, there was one person sitting filling up a cup first with ice and then beer. In turns everybody got beer like this. But due to the ice and the amount of people that was not a lot of beer over a long time. We finally got near the festival ground, you could see rockets shoting into the sky.
These homemade rockets are massive: They take up to 8 meters of bamboo, attaching a up to 3 meter long PVC-pipe with a diameter of 10-20cm to it, completely filled with black powder. Though the impressive size they are actually quite boring, because they don't explode. They just go up very high. It's fun to watch for a while but you could get definitely more out of rockets this size and price.
Suddenly I have a piece of chicken in my mouth. It's weird and has a lot of bones in it. I don't really eat it and secretly get rid of it. Next moment I have some grasshopper, roasted and served with tasty roasted leaves in my hand. Quite tasty, but nothing exiting.
The only guy who is talking English in the group is showing me around.
It got a long night and I didn't get back to Rike before 11am next morning.
After having some breakfast we got onto a Sawngthaew (sometimes: TucTuc - a vehicle similar to Rikshaws) to Ban Khoun Kham. We meet a English-Australian couple. They travel together with us to Kong Lor. We also check-in to the same hotel and take the tour to the cave the next day. 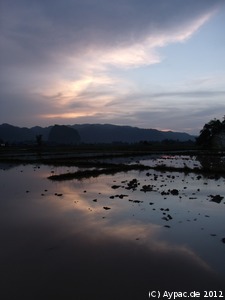 What cave?
The Kong Lor-cave is the with 7km the longest and biggest cave in Laos. A river is running through it. With really fast boats we cross it twice: Once against the stream and once with it. In between we stop and walk a short detour into a side-cave with many stalagmites and stalactites.
The cave is definitely worth the "detour". 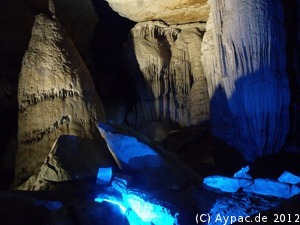 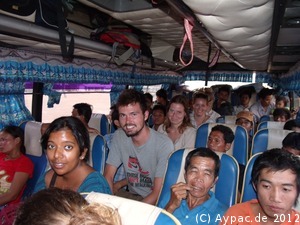 Next day we went back to Ban Khoun Kham. There we met another seven people going to Don Khong, one of the 4000 Islands. So we were a group of nine people. We got a bus to Pakse, where a swiss girl wanted to leave, but it was 3AM at that time, everything was closed and the bus driver didn't bring us to any bus station. He spoke no English and with the biggest efforts we could get him to drive us for a way to high price directly to the 4000 Islands. So that swiss girl came with us. At 6 or 7AM reached a junction and the bus driver said down the road the ferry to the islands would be going. After a three kilometer(!) walk with heavy luggage we really reached the ferry port. 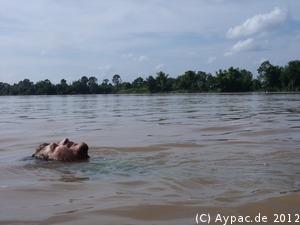 On the islands we found a nice and cheap (2,50? per night, double room) place. Over the time we were 8 German/Swiss and many other nice people.
There is not a lot to see on the islands, but it is a really chill place where you can hang around all day, smoke, take bathes in the Mekong, eat to much or enjoy cold drinks and beer.
One day six of us plus three others made a Kayak-Tour together which was awesome. We went over to Cambodia and saw everything of interest around: two giant waterfalls (one of them considered as the one with the most water in Asia) and the dolphin playing area. It was a fun but exhausting tour. 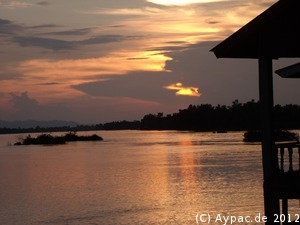 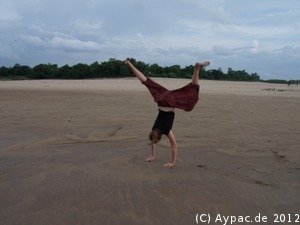 Three days later we went with the Swiss girl (Anna), who was actually from Liechtenstein, to Dong Daeng, another Mekong-Island 30km south from Pakse.
We took a bus and then a ferry (which was a fishers dugout canoe) and landed on a great beach. We decided to camp there. After getting some food and plastic bags for our bags (they wouldn't fit in our two-person tent in which the three of us would sleep) we took a bath. 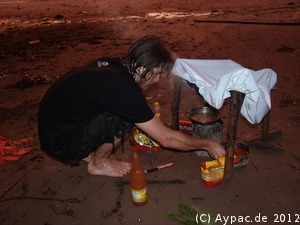 But it was already getting dark and after taking a bath we had to hurry to build our tent and cook - when it suddenly started raining. Cooking in the rain, washing the vegetables in little dirty rivers (from the rain) and protecting the tent from the rain by building small canals: This was one of the most awesome evenings of this journey.