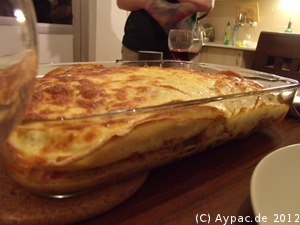 Returning from Cappadocia, we again went to Emre. He was a little bit sad, because he was quite sure, that he would get fired in the next days (what actually turned out to be true!). He didn't like his current job, but he had tried to apply in Europe before and didn't succeed.
Anyways, we decided to cook together. So we went into the city and - after getting our train tickets - we went to the supermarket to gather the ingredients. We made the main dish (pancake-lasagna) and he did the dessert* (cheese cake).
We all had quite a lot of fun (cooking is just great!). Both dishes turned out pretty amazing and tasty - and Emre opened a good bottle of wine! 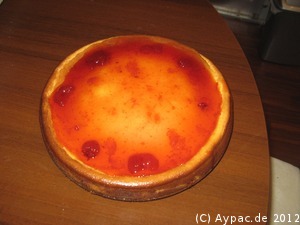 By the way, did I tell you that the whole area Emre was living in was owned by TAI (the company he was working at)? So in the whole settlement, there where signs of TAI, "TAI" printed on dustbins and even own school for the worker's kids. 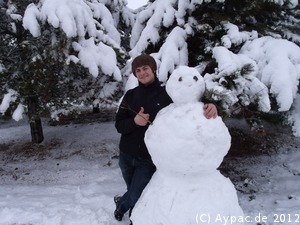 The next morning we went shopping first (we bought food for every meal for the next 4 days and spent ~40?^^) and took the bus into the city and took the train. The train itself was supposed to take 66 hours and 22 minutes to Tehran. The distance is **km and on the way you have to change to a ferry once (across lake Van). 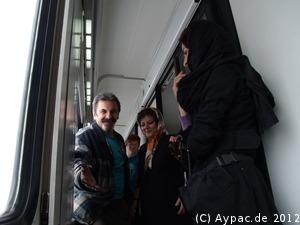 (Click on the image on the left! There are plenty hidden! Navigate with the arrows on the left and right side.)

Our cabin was nice, clean (like the whole train), had sockets (which only sometimes worked though) and you could adjust the heat. Also there was a nice Turkish guy, thinking of himself as author and photographer, though he was working in a mattress factory. In this article you'll find some pictures he took on the ride.
He just was in our room by coincidence, he had another cabin before, but the keys for that one didn't work, so he chose this cabin (he came from Istanbul, so he was in the train already when we entered).
We talked a lot, and as I said before, he was really nice. Also we met two students from turkey and some people from Iran, last ones thought us some words and explained a few things you need to know about Iran.

The atmosphere was great. Though the train only goes once a week, there were only three cars and those were only half full. People would meet in the floors, start talking in all kinds of languages, laugh, share ideas and food and of course giving advices for the countries to come. 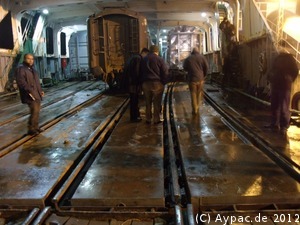 ({=== Click.)
Late in the evening (the train was late by around 3 hours already. Someone, who took the train four times already told us, this was normal), we arrived at lake Van. There we had to change to a ferry. We were all expecting a small ferry, even made jokes about who had to row.
This ferry turned out to be massive. It is one of the (I think someone told me) 3 ferries worldwide, which have actually rails on them, so trains can directly go on it.
But this is only for cargo. Passengers have to leave the train and go into the ferry normally.
The ferry seemed to be a little older and steam escaping from mysterious pipes all over the deck didn't contribute to my trust in it. I can't remember how long exactly it took, but it must have been something between 6-12 hours. 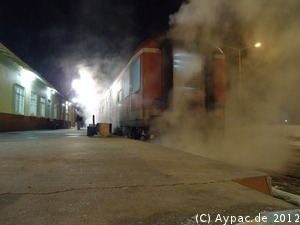 The new train was already waiting, when we arrived on the other side. Steam came out everywhere from the train and it looked most beautiful and mysterious - somehow ancient.
After doing the "check-out" from Turkey, we entered the train. It looked and was more luxurious then the last one, peanuts in little packages were served and the beds were bigger and softer.
Again we had two new room mates: A Spanish couple in their thirties doing basically the same trip we do, but with more time (and most likely more money). 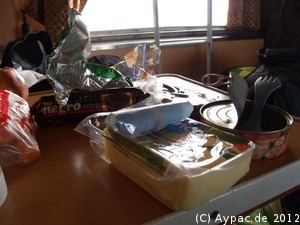 We were damn tired - we basically had no sleep that night at all and the over-heated (and not adjustable) cabin was doing no good to it - but still we had to get up every (felt like) 10 minutes to show passport, Visa, tickets, ...
The next night we arrived in Tehran - early morning (5AM or something) without (local) money nor a bus ticket nor any idea where the bus station was.