No gears&brakes in the mountains 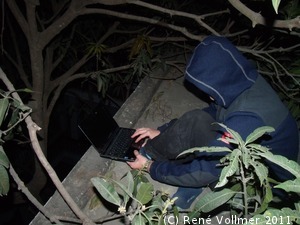 Lumbini. I told in the last report that it is the birthplace of Buddha. His original Name was Siddhartha Gautama. The word Buddha is a title for the first awakened being in an era.
This makes Lumbini a holy place for the Buddhists and for the Hindus as well (Some Hindu texts say that the Buddha was an avatar of the god Vishnu).
I think the rough story of Buddha everyone knows, if not: Read it here!

Though it is not 100% sure that this is the real and true spot, UNESCO decided to put it on the world heritage list and the (mostly) Buddhist community created a big Park around it (of which big parts still are being built). In the south you find the birthplace itself (a mark in a ruin on the floor), around it there is a museum. Surrounded is the area of the museum by artificial ponds. If you go up north you will reach an artificial river. On the left and on the right of it there are temples, builded by different countries. 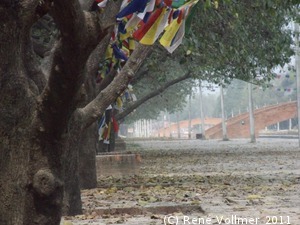 Even Germany has one there. But the (in our eyes) best one was the Chinese one. A very peaceful, quite and beautiful place. (Click the picture for more)

The big size of the park is on the one hand really great because it's not too crowded, especially not with tourist, but on the other hand big parts of the park have an atmosphere like being abandoned. 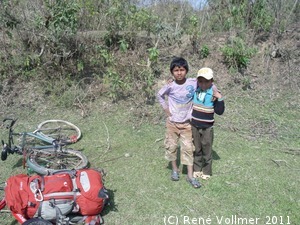 In the first night on our way we camped near a river. It was a quite nice spot. Except for four boys (maybe age 6-10) in the morning, who spoke quite good English (as surprisingly many people in Nepal! We expected people in India to speak good English, at least that's one of their official languages. But hardly anyone spoke English there) and were eager to know everything about us and our equipment, no one bothered us.
When we nearly packed up, they found a packet of cigarettes we still had from Islamabad. Suddenly everyone's bigger brother or cousin needed a cigarette. Of course we insisted that they bring them by - what 'surprisingly' never happened. 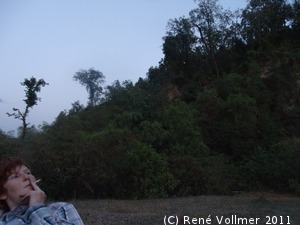 In the evening we reached one of the two announced (by the hostel owner in Lumbini) hilly areas. Our bikes were, as I told you, without gears and the brakes weren't really working. Great. We had to walk for big parts of the way and downhills was like a ride on a wild bull (think of a shitty, overloaded bike without proper brakes on shitty roads riddled with potholes. Not to speak of oncoming traffic). So we had our fun. But it was getting dark. We didn't eat anything for lunch or dinner and in these mountains villages are small and rare. We had some luck and could find one. And after some while we even could organize some noodles (made in a wok with vegetables as you find here everywhere) and some crackers/biscuits. And a few hundred meters later we even found a good spot to camp, except that there was no possibility to wash to be found. 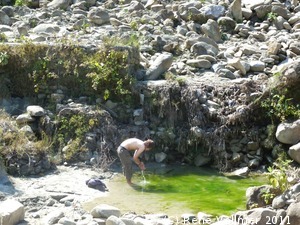 But at least in the morning we could find a small river for an extensive cat's lick. Great feeling, after the last day my skin felt as sticky as a fly-trap. 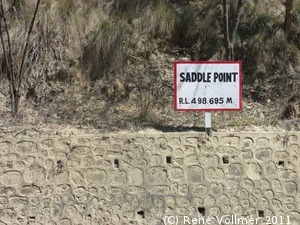 And we passed the saddle-point at 498.695m (the fuck?! Seriously? 0.005m precision?!). Which means that we nearly walked up 500m with our loaded bikes. But that was just the saddle-point. Before that - and of course after that - it was still going up and down. 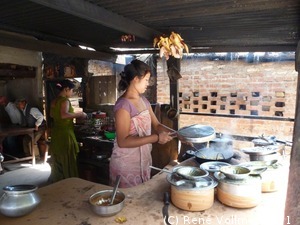 But at least we could find a nice (and quite clean!) of these local "Restaurant-Caffee-Bar"-things to get some morning Chia (black milk-tea, like in Tanzania just with some spices).
That day I took the bike which was running really bad and pushed the whole day. So we made quite many kilometres. In the evening, just before sunset, we asked in a village for a possibility to wash. It turned out that there was a big police-camp in this village. One police-officer brought us to the river. We had the VERY best wash/bath since a very, very, very long time.
When we reached back the police-camp the highest-rank officer told us the next village with hotel was really fast and we should stay here. Because it was dark already and he also offered us dinner, we stood the night. He also has been to Germany and said sorry for the lack of comfort in his camp (which was better than some hotels we stayed in). 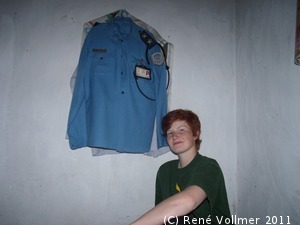 Just to get you an image of this police-camp: Until 2008 there was the "people's-war" in which 13,000 people died. And even after that there were from time to time some riots. So these police-camps look more like military-bases. Barbed wire fences surround an area where no trees or bushes grow. There are sentries at every corner and you see man heavy-armed policemen with rifles.


Everybody was up early and we got up early, too - and so we left at 6am. This turned out to be one really good move. We could easily make the remaining 73km and even take a big break in the hottest noon-time (usually we had to wait for the sun to dry our tent so we didn't manage to be on our cycles before 10 or 11 am).
In Kohalpur we stopped at a bike-repair shop and complete took the back axis of the bad-running bike apart, cleaned it and put it with some new lubricant together. Everybody around was there to help - and the shop owner even offered us to do it for us - FOR FREE! But it was the first time for the both of us doing it, so I really wanted to do it once myself. 45mins later we succeeded and Dilip (The teacher) came to pick us up.